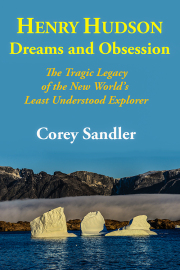 The Tragic Legacy of the New World's Least Understood Explorer

Now available, the revised Second Edition of “Henry Hudson Dreams and Obsession” by Corey Sandler, for the Amazon Kindle. You can read the book on a Kindle device, or in a Kindle App on your computer, laptop, tablet, or smartphone.

Henry Hudson was a ship's captain and an explorer, not a conqueror. He did not sail north of the Arctic Circle to claim these cold, rough places for England or Holland. And he did not plant the Dutch flag at the deep mouth or the shallow end of the great river that bears his name in what is today New York.

When he traveled north of Labrador and through the "Furious Overfall" into the floating ice and treacherous tides of the Canadian strait that now bears his name, he did so as a private citizen.

Was Henry Hudson one of the greatest explorers of all time?

Was he merely an accidental tourist who stumbled into history?

Or was he the world's worst ship's captain, master of four failed expedition, enabler of at least three mutinies and an atmosphere that led to his own murder at the hands of his crew?

Order a digital copy of the book to view on a Kindle, or on any tablet, smartphone, or computer that includes a Kindle app. If you would like to purchase an autographed hardcover or paperback copy of the book, please contact the author.

Print | Sitemap
© 2022, Corey Sandler, Word Association. All rights reserved. Contact me to license use of any photograph